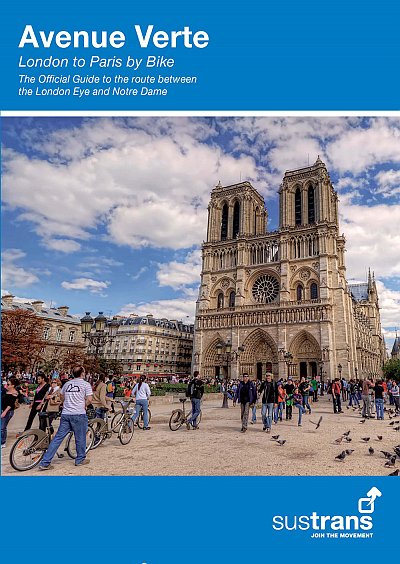 If you thought cycling between London and Paris on traffic-free paths and minor roads was simply a nice idea but not really practical, think again.

It lets you pedal between the hearts of both cities on traffic-free trails and quiet roads, taking in some fantastic landscapes along the way.

Cycle from the Thames in London to the Seine and Notre Dame in Paris along traffic-free paths and quiet roads. Along the way explore the beautiful South Downs, take the Newhaven – Dieppe ferry across the channel and choose between the gentle Normandy countryside (398km / 247 miles) and the picturesque Oise valley (462km / 287 miles). Approach Paris along the banks of the river Seine on traffic-free paths.

The vast majority of the Avenue Verte uses traffic-free greenways and minor roads. A number of sections have been specially constructed for the route and it is signed along almost its entire length.

There are plans to add more traffic-free sections in future, with much more greenway to be added on the French side in particular.

You can tackle the route all in one go, take in an easy-to-do section over a weekend. Or you can choose a smaller section to enjoy as a family day ride.

Along the way explore the beautiful South Downs, take the Newhaven – Dieppe ferry across the channel and choose between the gentle Normandy countryside and the picturesque Oise valley.

Approach Paris along the banks of the river Seine on traffic-free paths.

Published by Sustrans, the creator of the National Cycle Network, this is the complete, official guidebook to the entire route between the two cities, including the options via Beauvais and the Oise Valley. It includes detailed maps (at a range of scales, 1:10,000, 1:25,000 and 1:100,000), directions, what to see, accommodation and much more. The guide is spiral bound and folds back on itself to fit handily into a pocket.

This fully updated second edition from Sustrans includes maps, directions, alternative route options, what to see, accommodation and much more.

* Spur route to Giverny (for Monet’s garden) and Vernon.

Author Richard Peace has written and photographed more than 20 cycling titles through is publishing business Excellent Books. That includes his Veloscenic guide book.  He is also a contributor to numerous cycling magazines and websites including Cycle (the official Cycle UK magazine), Bikeradar, Free-wheeling France and A to B transport magazine.

The Guardian newspaper has a write-up on the route online: “Launched to coincide with the 2012 Olympics, Avenue Verte has two great cities, beautiful Anglo-Franco countryside and a sea voyage in the middle…”