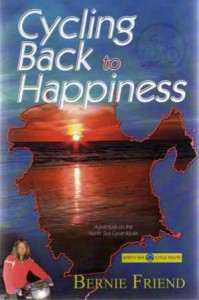 ‘Don’t let your biggest fears stand in the way of your dreams, even if your biggest dreams happen to be your biggest fears.’ That was exactly Bernie Friend’s attitude when he ditched medication and group therapy to overcome a very unwanted companion – paranoia. A complete novice to long distance cycling, Bernie confronted many demons on his epic journey – a coastal cycle route which circles 6,000 kilometres of the Netherlands, Germany, Denmark, Sweden, Norway, Scotland and England.Arm wrestling drunken trawlermen, a geriatric half marathon, Viking bring-and-buy sales, decapitated pirates, burning witches, Shakin’ Stevens mega mixes, sea crossing motorways, walking sand giants and remote islands most people can’t even be bothered to mark on a map are just some of the secrets coughed up by this adventure. Michael Palin and Bill Bryson watch out! Bernie’s very personal story told in an easy-going travelogue style will have you hooked from start to finish. This is hugely entertaining and downright inspirational!

Funny, uplifting and a real eye-opener for those who have never enjoyed the delights of northern Europe and Scandinavia — BIRMINGHAM MAIL

With a well-tuned nose for nutters, Bernie sniffs out the strange characters who populate the coastal route and discovers the healing power of travel along the way — SOUTHEND ECHO

Map for the Norway section: