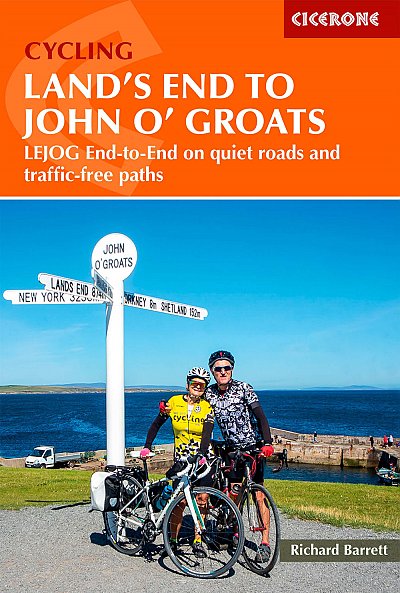 The Cycling Land’s End to John O’Groats Cicerone guide book is a concise guide to cycling LEJOG, describing an idyllic route that follows quieter roads and traffic-free paths but without too much meandering.

Covering 1000 miles, the route is divided into 14 stages and can be comfortably ridden in two weeks.

Easy-to-follow route descriptions are accompanied by clear mapping and useful gradient profiles, together with route highlights and points of interest, of which there are many. Invaluable tips and tricks are also included from preparing yourself to preparing your bike, together with logistical advice such as getting to and from the start and finish, accommodation options and more.

In addition to the main 14-stage schedule (which includes an alternative option through Central Scotland), longer and shorter schedules are also suggested, making it easy to prepare a personally tailored adventure.

The route, which passes through a diverse range of landscapes, from almost sea level across the Somerset Levels to over 1400ft through the magnificent Cairngorm Mountains, showcases some of Britain’s best cycling. It is a must for anyone who’s ever been remotely tempted to take on this iconic end-to-end challenge.

Introduction
Why the End-to-End route?
Tailoring this route to your needs
Which direction to ride?
Selecting a schedule
When to ride
Riding alone or as part of a group?
Getting there
Getting back
How much to budget
First and last nights
Accommodation
Baggage transfer
What to take
Preparing yourself
Preparing your bike
Eating
Phones and Wi-Fi
Waymarking
Maps
Practical tips
Using this guide
GPX tracks
Land’s End to John o’ Groats
Stage 1 Land’s End to Fowey
Stage 2 Fowey to Crediton
Stage 3 Crediton to Clevedon
Stage 4 Clevedon to Worcester
Stage 5 Worcester to Nantwich
Stage 6 Nantwich to Garstang
Stage 7 Garstang to Penrith
Stage 8 Penrith to Moffat
Stage 9 Moffat to South Queensferry
Stage 10 South Queensferry to Pitlochry
Stage 9a Moffat to Balloch
Stage 10a Balloch to Pitlochry
Stage 11 Pitlochry to Aviemore
Stage 12 Aviemore to Alness
Stage 13 Alness to Tongue
Stage 14 Tongue to John o’ Groats