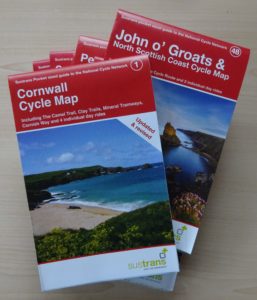 These are the 15 Sustrans cycle maps that would lead you through England and Scotland from Land’s End to John O’Groats – or John O’Groats to Land’s End. There is no single official route, and so if you prefer a different combination of maps, let us know.

The maps are pocket-sized, lightweight and show the National Cycle Network routes.

You can order each one separately or order the whole lot together here.

Alternative for Out of Print map:

Follow the Bike Ride Maps Facebook page for information when the dates for reprinting have been announced.

If you intend to follow the route in  the Cicerone End To End Cycle Route guide book, their route crosses into Wales, and so you would also need the Sustrans South East Wales map, which is not included in this selection. The Cicerone route also goes through South Devon rather than North Devon, so you can let us know if you prefer the South Devon map to the North Devon map.

If you prefer a more central route through Scotland, you would need the Perth map and the Cairngorms map instead of the Oban map and the Great Glen map. Again, let us know and we can switch them for you.

You can read more about LEJOG or JOGLE here.