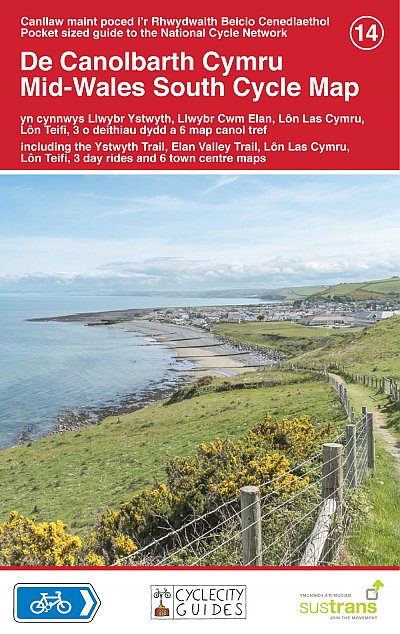 This area map shows the National Cycle Network and local routes in this area. It covers the southern area of the Mid Wales region of Wales, Bulith Wells, Brecon, Rhayader and Carmarthen.

Sparseley populated Mid Wales is an ideal location for adventure if you want to get away from the crowds. The coastal areas around Cardigan Bay have great views out to sea, and the counties of Ceredigion and Powys afford some challenging gradients as well as some wonderful traffic-free paths. Aberystwyth is the hub of the area and a university town with links to many traffic-free routes, and the Elan Valley, known as ‘the Welsh Lake District’ is known for it’s striking dams and reservoirs.

National Route 42 between just north of Abergavenny and Hay-on-Wye.

National Route 81 between Aberystwyth and Llanidloes via the Elan Valley cycle Trail.

National Route 82 between Aberystwyth and Llanybydder, Tregaron and the Ystwyth Trail.